Posted by Laurie on September 20, 2014
Posted in: Its Just Science!. Tagged: Science. Leave a comment

Carbon fibre composites have been in widespread use for decades – in Formula1, such materials form the chassis of every car, and up to 50% of an aircraft’s structure is now composite-based. It is all about their mechanical properties – when compared to metals, composites offer a superior strength-to-weight ratio, so in mass-critical applications, carbon fibre composites are the material of choice.

But the performance of these materials is not defined by the individual fibres – when it comes to determining damage initiation and growth in the composite, it is the properties of the polymer matrix that dominate. The most widely used polymeric resins tend to provide high stiffness but low fracture toughness, which can result in delamination in the final composite. Now, a team from Quebec’s McGill University have a demonstrated that the inclusion of multi-wall carbon nanotubes (MWCNTs) in the matrix significantly improves its fracture toughness, leading to a new generation of tougher carbon fibre composites.

Published in Carbon 79 (2014) 413-423 [DOI: 10.1016/j.carbon.2014.07.084], this work focused on modifying the brittle thermoset resin used in most carbon-based composites. Two different formulations were used – in the first, functionalised MWCNTs were mixed with the resin. The second formulation combined functionalised MWCNTs with a more traditional acrylate-based toughening agent. A technique called Resin Film Infusion (RFI) was then used to flow the MWCNT-filled resin through layers of carbon fibre mats, to produce the laminated composites. RFI is used in the aerospace industry to produce composites impregnated with rubber particles, but McGill researcher Pascal Hubert used it to ensure an even dispersion of aligned carbon nanotubes throughout the resin.

Fracture toughness tests were carried out on the MWCNT-filled resins and on the final laminates. The mechanical properties of the raw polymer resins were only marginally improved by the addition of MWCNTs. But, the final laminated composites exhibited significant improvement in their delamination properties (up to 143% in the case of Mode II fracture toughness). Hubert and his team believe that when the resin flows through the carbon fibre fabric, the fibres act as a sieve, ensuring a more even dispersion of MWCNTs, and improved mechanical properties. The team believe that this work can lead to a new generation of nano-enhanced carbon fibre composites, but further work on scaling up their system is still needed.

What do you think guys? It took me all of 3 mins to do! I am hoping to get a proper designer to create something a bit “sexier” soon, but I think this will do for the moment 🙂

Vibration filtering in nature: how a spider hears

Posted by Laurie on September 9, 2014
Posted in: Its Just Science!. 1 Comment

Biological sensory organs help us to receive, interpret and respond to environmental stimuli. In the world of invertebrates, these sensors are remarkably complex – spiders ‘hear’ – or more accurately, sense vibrations – through strain-sensitive grooves, called lyriform organs, distributed along their legs. One species of nocturnal spider found in Central America –Cupiennius salei – optimizes its ‘hearing’ by sitting on mechanically stiff plants, ensuring that vibrations from nearby prey, predators or sexual partners can be easily sensed.

The lyriform organ is extremely sensitive to substrate vibrations – at high frequencies (> 40 Hz) deflections as small as 10-9 – 10-8 elicit a response in the leg. As well as being highly sensitive, the system can also filter out low-frequency background noise – a challenge facing those designing bio-inspired sensing systems. An international team of researchers believe that they have discovered how this ‘filter’ works, and say that their results will establish a basis for bio-inspired sensor design. 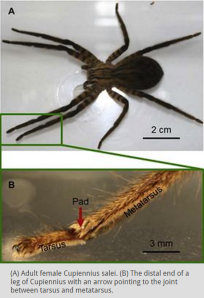 Led by the Georgia Institute of Technology [Acta Biomaterialia (2014) DOI:10.1016/j.actbio.2014.07.023], this work focused on the mechanical properties of a skin-pad close to the sensory organ. The pad is found between the metatarsus (second-last segment) and tarsus of each leg, adjacent to the lyriform organ. Earlier research suggested that this pad contributed to the filtering mechanism, but details were unclear. By using surface force spectroscopy (SFS), the team directly measured the mechanical response of the pad’s viscoelastic surface. By mapping the pad’s surface at a range of temperatures (between 15–40 °C) and frequencies (from 0.05 to 40 Hz), it was possible to define the thermomechanical behavior of the material under typical environmental conditions experienced by the spider.

The group found that the viscoelastic properties of the pad surface were highly temperature-sensitive. At around 20 °C, it became highly viscous, meaning that the spider is particularly sensitive to substrate vibrations at this temperature. This matches closely with the environment Cupiennius – the mountainous region it inhabits has an average night-time temperature of 19 °C. The viscoelastic properties of the pad also define the filtering effect at low frequencies – the mechanical contact between the pad and the tarsus displays a higher effective modulus at high frequencies than at low frequencies. This suggests that mechanical energy is more efficiently transmitted to the sensory grooves at high frequencies.

While more research is needed, the authors believe that this work will help in the design and development of efficient bio-inspired sensors.